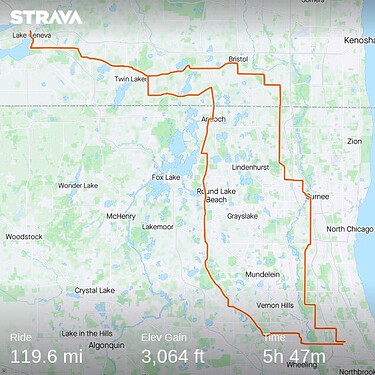 On Friday I completed a 120 mile ride with a group of cycling friends. I was planning to do only 80 miles (part of the group was flipping after 2hs), so I only had enough nutrition and hydration with me for 80 miles. At the turn around point, I was feeling good and decided to go the full 120 miles. I figured I could buy food and electrolytes in gas stations for the remaining 40 miles, plus I had one single-serve packet of Skratch and 1 “Liquid IV” single-serve packet. That ought to do it, right? Nope.

As you can see from the graphs below, once I ran out of my very well-planned (tried and proved) hydration and nutrition plan at about mile 80-85, my HR increased well into the 170-180 bpms and stayed there for almost 1 hour! I was having electrolytes, but after mile 80 it was a mix of whatever I could find, and it just wasn’t enough. I started to struggle big time to stay with the group, even though the efforts (as you can see in green) were similar to the previous ones on the ride albeit at a lower HR. @dfriestedt told me my face was really, really red! We came into a stop light at around mile 100 and he gave me 2 salt tabs. I felt my core temp drop shortly thereafter, and I started to feel better.

But at that point, the damage was done and I bonked. There was no catching up or making up for being dehydrated. You can see that from mile 100 to the end of the ride, my power was much lower. I was feeling my arms and scalp prickling. For the rest of the day and all the following day I felt the effects of dehydration: fatigue, low energy, poor appetite. I finally bounced back 48hs later after lots of fluids, protein, carbs and veggies.

The more well-trained an athlete is, the more their bodies suffer with not being on point with nutrition and hydration. I still think I need to do a sweat test, as I suspect that I need more than the usual 600 mg of sodium/hr that I usually consume for long rides. By the way, this was not a particularly hot or humid day. Temps were 70-80F (21-26C).

This is so helpful! I can see so many similarities to my performance on the Everesting and even the race that I had issues with last week. I am such a heavy sweater - I need so much salt. Thanks for posting. It really helps make the point

Thank you for sharing. Sorry you had this type of experience.

Thanks for this illustration.
This happened to my husband sort of on his attempt at his 400k last weekend. At the beginning of the ride, he grabbed the wheels of this really fast pace line. While it was fun, he burned his matches early and at mile 187 his head told him to quit. It was a hot day. He had a plan and didn’t follow it. And it cost him.

You had a plan and it was a solid plan. It’s so frustrating when we know our plan is good and deviate. I’m glad Drew was able to give you some salt sticks and you ate them.

Last weekend I ran out of water after three hours. It takes me an hour to get to the meeting point for my Saturday rides. My friends have about a 15 minute ride. I was out of water. Asked to stop and they were like “we are almost there”. Thankfully one guy had tailwind in his bottle and gave it to me. Otherwise I think I’d have been in real trouble.

But wow, what a ride!

I feel your bonk @Coach_Theia! I have done that more than once when I was learning how to fuel long rides. It’s a humbling lesson to say the least.

I’ve also bonked hard and badly on long training rides. It’s no fun, especially with people either rescuing me or dragging me home. I’ve also fallen to the temptation to ride longer/further than planned and hoping the nutrition/hydration could keep up. Of course, the longer the ride, the lower the margin for error overall, and once the damage is done, it’s done.

Very late into replying to this thread I read quite a while ago… The very same happened to me and I’m humbled by it such that I stuck onto @Coach_Theia’s advice like a sticky burr to fix my nutrition/hydration/warmup such that I wouldn’t kill myself at every level of being. It works! I never bonked since. Z Bars, Tailwind/Skratch and ENOUGH of both are my secret sauce. I want to try out pickles once I’m back from vacation as I know I will 100% blow it with a long hard ride of some sort. I haven’t taken more than 3 days off the bike in… forever? Now, I’m about to be off for two weeks. It’ll be an education. I love all the insight I’ve gotten here for balance, for being a female athlete starting late and foremost… for so much badass awesomeness I see everyone bringing along here!

To add to this thread. My husband bonked on a 20 mile ride today. He had no nutrition and one water bottle because we were stopping at mile 20 for lunch. We missed the turn and had to backtrack 4 miles which were hills up, then down the up again. So it was a challenging 4 miles. He wasn’t drinking enough. He didn’t bring anything. Not even a gu. I have food in my front bag. None of which he likes. I had salt sticks….two water bottles, he doesn’t like my hydration. By th time we got to lunch he was beyond hangry. Wasn’t listening to my suggestions. Ugh we wound up arguing in the car about it.

He apologized afterwards and said he’d listen to me when it happens again. I guess I needed to vent here. Sorry. I wound up just riding his pace on the way back. He didn’t and couldn’t grab my wheel and I didn’t want to make him feel worse than he was. I guess my point is, you can even bonk on a short ride. It was hot today. It was 40 miles with 2,000+ feet of climbing.

It’s definitely possible to bonk on a short ride, even as an experienced rider.
I get downright illogical when my blood sugar drops from insufficient nutrition. I also lose the ability to think clearly. It’s a pretty common symptom of low blood sugar, then you factor in the adrenaline from riding in general. After you’ve done it a few times you recognize the feeling but that doesn’t make it any easier in the moment. Usually my head clears once I’ve recovered a bit, but it isn’t always pretty until then.

@stacypro thanks for your response. You are right. He wasn’t reasonable and I had to calmly wait it out.

And the other moral to the story, us girls have our hydration and fuel right… you got this @gosimrr! well done!

Has anyone used this brand?

I got a free trial of LMNT and it was too salty for my liking.

I haven’t but I believe @Kriddley has.

I tried one on a long ride (mixed with Perpetuem) and I didn’t love it or hate it. I’d rather take electrolyte capsules as I need them than have to drink my way through something. I have a friend who swears by them though. I only tried the plain ones, I didn’t like the idea of the artificial sweetener in the flavored ones.